About the Vestavia Belles

The Vestavia Belles have a long standing tradition in our beautiful city. They began as an organization in 1979, to serve as Vestavia Hills Junior Hostesses at civic events. Since that time, they have evolved into an active and integral part of the volunteer community in Vestavia. The Vestavia Belles are comprised of Sophomore, Junior and Senior girls who are residents of the City of Vestavia or attend Vestavia Hills High School, have good character, a pleasant personality, and enjoy the civic responsibility of serving her city and local charities. If you are interested in having the Vestavia Belles serve at your event, please fill out the Request an Appearance form below.
​Click HERE to download the 2021 Belle Application
​Applications will be accepted starting August 24, 2021
Belle Applications are due October 1, 2021
The Vestavia Belles were featured in the Vestavia Magazine in the Spring of 2018. 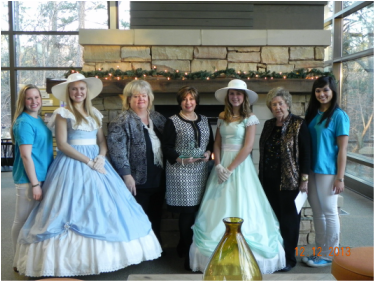 Left to Right Lara Frances Lawson, Cailyn Levant (Belle Vice-President), April Moon, Director, Children's Library, Rita Greene (Belle Chairman), Mary Jane Young (Belle President), Anne Boston (Chairman ~ VH Beautification Board), Paris Malensek
The Vestavia Belles and Rita Greene were awarded the Jefferson County Library Champion Award for 2013.  There were awards given to Library employees from the Downtown Branch, Bessemer, Hoover, Leeds and Homewood Branches.  What was so significant about this recognition was that none of the Vestavia Belles nor Rita Greene are employed by any Library.  Rita Greene had a vision to start an interactive community service with the Vestavia Belles and felt that the new Library in the Forest could certainly benefit from having the extra help with the children's Summer Reading Program.  All 53 Vestavia Belles signed up to work 8 hours for a total of 424 hours during the summer months.

April Moon was so appreciative of the commitment to the library and asked Rita Greene about having the belles start an additional program in the fall called "The Story Trail".  The Belles came
through once again reading stories along the trail.  The story trail was done on Saturday mornings from the first Saturday of September through November 16th.

The information listed below was submitted for the nomination by April Moon, Director of the
Children's Department, at the Vestavia Hills Library in the Forest.

The Vestavia Belles began as an organization in 1979, to serve as Vestavia’s Junior Hostesses at civic and cultural events. Since that time, they have evolved into an active and integral part of the volunteer community in Vestavia. The Vestavia Belles are comprised of Sophomore, Junior and Senior girls that are residents of the City of Vestavia or attend Vestavia Hills High School, have good character, a pleasant personality, and enjoy the civic responsibility of serving her city and local charities. One lucky recipient of their service is the Vestavia Hills Library in the Forest.

Every year for the past 4 years, members of the Vestavia Belles have each volunteered 8 hours of time helping with the Summer Reading Program in the Children’s Department. Sponsor Rita Greene schedules the girls for shifts during the busiest times in the department and these girls register summer readers, hand out prizes, help with programs and even shelve books! With over 50 girls working 8 hours each, they log in over 400 volunteer hours during the months of June and July. With the short staff issues that plague most libraries, this extra influx of volunteer help during the busiest time of the year insures that our patrons can have the best library experience possible. This past summer, we handed out over 500 prizes each week and signed up almost 3,000 children for the Summer Reading program. Without the help of the Belles, the whole program would suffer.

In addition to helping the library with Summer Reading, the Belles also volunteered to be the storytellers on the new “Storytrail” this fall at the Library in the Forest. The library has added a unique and different program thanks to the generous nature of this wonderful group. Mrs. Greene and her Belles are not only champions for their library, but true champions in their community. The Vestavia Hills Library in the Forest is honored to nominate them for Library Champion for 2013-2014.